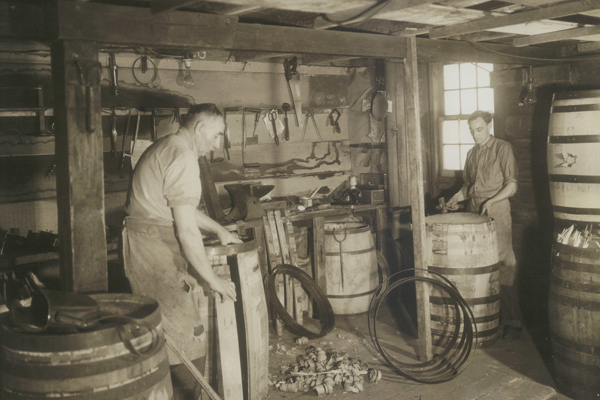 In 1780, a few years after the signing of the Declaration of Independence but before a fledgling nation ratified the Articles of Confederation, with the Revolutionary War unfolding in his own New Jersey backyard, Robert Laird made record of the first commercial transaction for his “Old Apple Brandy.” There is evidence of a distilling operation that began more than 80 years before that, when Alexander Laird emigrated from Scotland to New Jersey. The company’s history can be traced from these roots predating the birth of the nation, through the Civil War and even continuing through Prohibition, to today where the 10th generation of the family is at the helm. Operations are now split between Virginia, where all distillation takes place, and the New Jersey facility which handles the less romantic, but equally important blending, bottling, packing, and shipping.

The company is synonymous with their product: apple brandy, or applejack. A recent post on this site looked at how deeply intertwined apples and cider making were with colonial American history. Applejack is the natural next step from cider production, using a method that doesn’t require nearly the precision of traditional distillation. Cider would simply be frozen, and the water ice removed and discarded, leaving a higher percentage of alcohol in the product that remained. “Jacking” or freeze distillation was not entirely feasible on a truly commercial scale, at least before the advent of modern refrigeration, but for the homesteader looking to create a stronger spirit (and one with a much longer shelf life than cider), this was an ingenious invention. Laird’s products have long utilized a traditional column still, with no loss in quality or character.

Laird’s is deeply connected to nearly 300 years of American history. There are records of it being provided to George Washington’s troops. It was one of a few distillers to survive Prohibition, operating under a special license to produce “medicinal applejack” and fresh, non-alcoholic cider. This was the famed Federal Liquor License #1, which is frequently, and erroneously, cited as being issued in 1780 by a Treasury Department that didn’t come into existence until nine years later. Fact and fiction are sometimes hard to separate in the rich lore of Laird & Co. Recent history is much more clear - production shifted to Virginia in the 1970s as New Jersey crops became more limited. All Laird’s products begin from 100% Virginia-grown apples - Winesap, Pippin, Granny Smith, and others.

This American spirit has never quite gone out of fashion, nor ever entered the truly mainstream. That constancy is remarkable in itself, and the products themselves are exceptional. After distillation, most of the brandy rests in cask for between four to twelve years. There is one un-aged product in the lineup, the bold and energetic Jersey Lightning. The ubiquitous Laird’s Blended Applejack bottle combines the younger casks and neutral grain spirit, while the older barrels find their way to Bottled in Bond, Single Cask, and high age statement releases. A testament to its recent rise in status in the world of gastronomy, a private bottling of Laird’s would grace the table at the end of your meal at Eleven Madison Park for a number of years, an indulgence to end one of the best dining experiences available anywhere.

A decent bartender will be sure to know the classic pre-Prohibition Jack Rose cocktail, which made an appearance in Hemingway’s The Sun Also Rises, and probably has a variation or two up her sleeve ready to offer. Wisconsinites should find the applejack and apple brandies fascinating spirits to employ in our local style of Old Fashioned. A particularly delicious iteration of that drink takes form in the American Trilogy, blending equal parts rye and applejack with sugar and bitters. There is a time and place for muddled fruit, but not here, please:

Stir with ice, garnish with orange peel, and enjoy.

Whether you are craving a bottle with a fascinating story behind it, or just looking to expand the diversity of flavors your home bar can offer, there will be a Laird’s bottle for you. The older expressions call for a neat pour to savor slowly, and the blended applejack is at home in an array of cocktails. Let us know how you are enjoying the Jersey Lighting, but we imagine it best enjoyed quickly, and ice cold.